IF YOU were to ask 18-year-old Adeika Perrin just why he chooses a life of servitude through his many mentorship responsibilities, he will simply tell you,"it's not what you get from it, but who you become from it." At least, that's what he told Youthlink.

Now an upper sixth-form student at Belmont Academy, Adeika is heavily involved in school life, where he is a proud mentor in all of his school's mentorship programmes for boys. Among his responsibilities, she lists being a refect, a dean's assistant, the external adviser for the Belmont Academy Students' Council body, a peer... read more

THE RONDELL Positive Music’s ‘Open To Purpose’ Devotional School Tour continued its journey of inspiring the younger generation when the team visited Tichfield High School on Monday, October 28. The morning’s proceedings began with the setting up of the booth by lead sponsor Grace Food Drink. They provided students with breakfast shakes, ranging from Walnut Caramel and Butter Almond to Tropical Strawberry and Smooth Vanilla, along with snacks from Frito-Lay, as well as Catherine’s Peak Spring Water. The scene was peaceful and very relaxing, especially as the school is situated right by the... read more

IT WAS a hot, sunny day, but that didn’t sap the energy from the Youthlink/Honey Bun High Achievers School Tour at Waterford High School, located at 94 Waterford Parkway, St Catherine, on November 5. The smiling faces welcomed the team, and the energetic students to whom they belong were ready and willing to help the team to set up for the full force of the tour that was to come.

The event began with upbeat, vibrant, popular music pumping from the sound boxes atop the Youthlink trucks that drew the attention of many of the students in the school yard. To the left of all the... read more

THE YOUTHLINK/HONEY Bun High Achievers School Tour ventured to Spalding High School on October 29 to give the students at the cool, Clarendon-based institution – surrounded by luxuriant and attractive plant life – a day to remember.

“If I lived here, I would not bother to bathe in the morning to come to school. I would bathe after school, but not in the morning or in the night. The water in the pipes here [is] too cold,” said comical media personality and MC of the tour, Cornelius Grant.

His declaration received an amused response from the crowd of students who filled the... read more 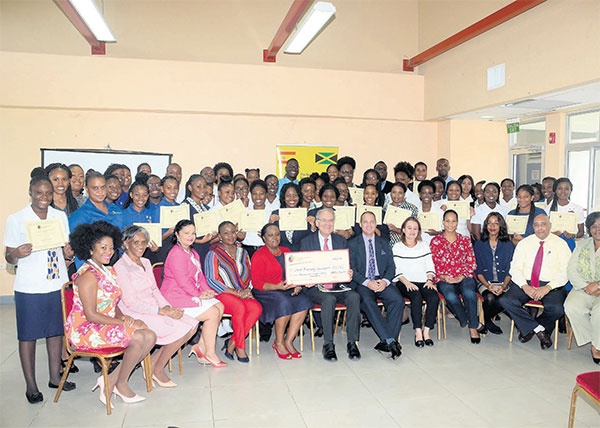 Representatives from The Spanish-Jamaican Foundation with the scholarship recipients.

ON OCTOBER 25, 2019, The Spanish-Jamaican Foundation (SJF) handed over more than J$3.3 million to 49 students from seven tertiary institutions, to offset their educational expenses. This is part of the foundation’s ongoing efforts to encourage the advancement of Jamaicans through education and, specifically, Spanish language acquisition, given the extensive benefits that may be derived from such a skill.

At the scholarship handover, students of Montego Bay and Brown’s Town community colleges were given partial scholarships to assist with the payment of their school fees, while... read more

THE YOUTH LINK/HONEY Bun High Achievers School tour made its way to the corner of Young and Ellis streets in St Catherine in search of Spanish Town High School. Upon arrival, the students and teachers were in the middle of a session, but when they saw the Honey Bun vehicle and Youthlink team, eyes gazed in curiosity and whispers began around the compound.

Popular media personality Cornelious Grant grabbed the mic and announced the presence of both companies, and when the high-tempo music and vibrant moves from the Honey Bun dancers began, within minutes, scores of students and... read more

Inspiring a culture of charity

PUTTING SERVICE above self and making good use of the figurative 'loaf of bread' we all have is a powerful school of thought for Old Harbour High School student Tajay Francis, and he wants to get other young men thinking
this way, too.

"I think that as it is in Jamaica, our young men are falling behind," he said. "More of them should be involved in charity and use the loaf of bread that they have to give back, so that other young men see them as a role model and see them doing good," he shared.

This is something Tajay believes will steer Jamaican boys in a positive... read more

NEW FORTRESS Energy (NASDAQ: NFE) continues to demonstrate its commitment to education in Jamaica by awarding a total of 22 tertiary scholarships and 27 high-school bursaries to high-achieving students across the island. This represents an investment of over J$10.5 million for the 2019-2020 academic year.

The scholarship handover at The University of the West Indies (UWI), Mona, to 11 recipients took place on Thursday, October 10. At the event, officials from New Fortress Energy and UWI discussed the expansion of the company’s partnership with the Faculty of Engineering, UWI, Mona... read more

THE JAMAICA Youth Motivators is a non-governmental, non-profit charity organisation dedicated to youth development and empowerment through advocacy, mentorship and volunteerism. As a major part of our initiative as a youth-led group, we hosted a three-day series, from Friday, April 12, to Sunday, April 14, which entailed workshops with the objective of motivating and inspiring our audience of youth and adults, equipping them with the tools to drive their own success and with a renewed perspective.

DAY 1
On Friday, April 12, we hosted our first workshop under... read more

FUTURE
“As the present captain for this ship it is my vision for Penwood High to be the premier high school, offering a comprehensive education utilising the best practices in international secondary education. We will continue to play our part as we advance the welfare of the whole human race,” she said.

Specially invited guest, keynote speaker, and Member of Parliament for the Kingston and St Andrew Division, Prime Minister Andrew Holness, highly praised the educators and administrative staff for their efforts in maintaining discipline, in light of previous... read more