Rabalac Blazing the track and the stage 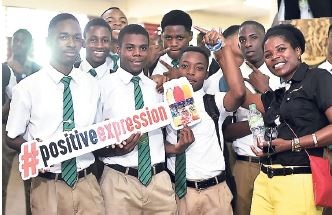 The Grace 'Flava With A Beat' Champs School Tour made its third stop at the home of the reigning champions of the ISSA/GraceKennedy Boys' Championships, none other than Calabar High School, on Friday, February 11. As the school bell rang, the boys crowded the auditorium for the extra-special after-school activities!

With this being the third stop on the tour, it was evident that the boys of Calabar were prepared for the Grace team! They made it clear that they brought fire not only on the track, but on the stage too! The 876 Water lyrics clash was full of vibe, and the strong-man competition and team dance-off were nothing short of exciting! Of course, lots of prizes and giveaways from the sponsors enthused the student body and ensured maximum participation and vibe from the crowd.

Calabar old boy and Assistant Global Category Manager V.J. Tolan took Youthlink on a tour of the school and showed off the impressive training facilities. He was proud to be able to give back to his past school, saying, "We're just sharing the vibe and sharing the food with the boys of Calabar, in anticipation of March 20-24, to get them ready for Champs and build their vibe and reinforcing our theme 'Positive Expressions'!" All this while students sampled food and drinks from the myriad of Grace brands on board.

Speaking further on the importance of this theme was Karen Mussington, senior brand manager, Beverages, who shared: "It is so important to enforce the theme of 'Positive Expressions' - with everything that's happening in Jamaica now. Every day, we get up and hear about a new set of murders, so it's important to ensure that we impart on our young, future leaders the importance of being positive. So, despite everything happening, we focus on positive thinking, positive energy, positive attitude, positive vibes and, most important, a positive outlook on life. We wanted to come here and not only give them food and have excitement but to leave a message with them, and we thought 'Positive Expressions' was the best message to leave with the schools throughout the tour."

The Calabar track team won the jackpot from Grace, as they received a donation of a supply of Grace Food Drink, 876 Water and Lucozade to support their nutrition regime leading up to Champs. The Grace team promotes a holistic, healthy lifestyle, and aim to emphasise this, especially among athletes, through the school tour.

Pettrine Harris, brand manager, 876 Water, further highlighted this, speaking more on the importance water plays in a healthy lifestyle, especially for athletes. "With heavy physical activity, you lose electrolytes. So water does the job of replenishing those electrolytes and it's important to drink water that not only has electrolytes, but also calcium and magnesium, because they play a key role in recovery. And 876 Water has all three of those elements: calcium, magnesium and electrolytes, so we always encourage our athletes to keep hydrated with 876 Water."

We also scored a minute with track star Christopher Taylor, captain of Calabar's track and field team. While chatting with him, we lost count of how many medals he's won! He's one to watch as he says he'll be going for another set of wins in this year's Champs! "Its a great feeling knowing Grace is there to support us, to show us positive energy going into the Championship, so it really helps us to get ready." Christopher Taylor's secret? Well, he couldn't possibly reveal that, but he shared his his plan: "Keep focused, train hard and push harder in these last few weeks before Championships."

According to Coach Hawes, the team is in high spirits and is ready to defend its title.