Anastasia Wilmot not allowing HIV/ AIDS to imprison her mind 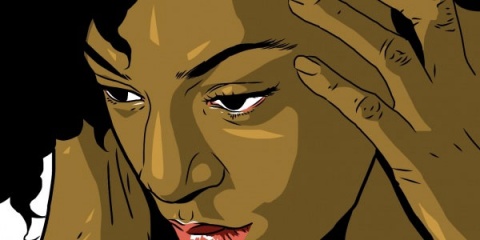 Armed with an unbridled spirit and a squeaky voice to go with her petite frame, Anastasia Wilmot* seemed very hard to rattled by the toughest of challenges in life. “I grew up with my grandmother, who was very loving but in strong way, so i guess i learnt how to bear things out from her,” declared Wilmot.

However despite this strong-willed countenance, the 17-year-old Wilmot would go through a winter of tribulations in 2015 when she lost her grandmother and mother a month a part. “It was so hard on me, my grandmother had cancer and refused to do surgery, so things gradually got worse until she passed. The next month, my mother was becoming real sick and losing a lot of weight. One night she ran around to my aunt and begged her to take her to the hospital, then a day after that she passed,” remembered Wilmot.

During this period things started to spiral downwards for Wilmot, a third-form student who was now without a home to live. “After my mother’s funeral, I moved in with my step father, but he was very bitter about the lifestyle of my mother. So he took a lot of the frustration out on me, everyday he would say that i am cursed and i was the reason for her death,” stated Wilmot.

Constantly enduring these spates of assaults along with mourning the deaths in her family, Wilmot sought refuge in her boyfriend at the time, who was two years older than her. “His mother really liked me so i explained the situation to her and she told me i could stay by their house. I remember choosing a day when my stepfather was going to come home late, from there i packed all the things i needed as well as my school books,” she recalled.

For Wilmot this emotional tumultuousness was having some serious side effects which stated to affect her school work. “That whole term in fourth form was horrible for me, i remember i was skipping school with some friends as well as having sex with my boyfriend. My mind just wasn’t here and i really didn’t have anyone i could talk to for guidance,” lamented Wilmot.

After noticing her deteriorating emotional condition, her aunt in law, who is a mother of six, intervened in towards the end of the school term in that year. “She started taking notice of me and realised i was heading in the wrong path, so she told me to come and live with her,” continued Wilmot.

This was a welcomed opportunity for Wilmot, who felt comfortable and safe in her home. During the summer her aunt took to the hospital to do a routine check up before she entered fourth form. “I remember after doing some blood test two doctors walked into the room and started asking me about my family history especially my mother. But i knew nothing, so afterwards they told me i was two months pregnant and HIV positive. To be honest i don’t even remember if i passed out,” shared Wilmot.

She continued to describe the experience as the doctors provided solace for her, “they assured me it wasn’t the end of the world and that many persons were living healthy lives while having the virus.”

A sense of betrayal

Ironically this was the same hospital her mother passed away in and the dossier on her revealed that she was aware of her HIV status for years. “When the doctors were reading from her file, i realised that she knew all this time, i was so angry.”

“When i was growing up, i would get sick a lot and she would always blame it on my asthma. But my immune system was weak because i wasn’t talking my medication. What made matters worse was that she refused to take medication, so by the time she was in her mid thirties she had lost weight drastically.”

All this was a lot for Wilmot to process, as she began remembering things from the past and linking it to the information that she was told. “Growing up she wasn’t there for me, she was always going out with different men, this must have been why my grandmother took me in. The worst feeling though was the fact that she was lying to me about her status all these years. I don’t know if i will ever forgive her for that,” lamented Wilmot.

To compound her issue, she had to deal with the fact that she was pregnant. “At this point, i was numb to everything but my aunt provided me with so much support. Looking at my poor financial situation plus the fact that i had HIV/AIDS, i decided to abort the child. The process was so painful but i couldn’t manage raising a child,”

The next thing she had to do, was to be upfront with her boyfriend by urging him to get tested. “At first he was very unwilling, so i had to talk to his mother and we both convinced him it was the responsible thing to do. Luckily he was HIV negative,” disclosed Wilmot.

Putting the summer behind

Having experienced all this in the summer of 2016, she has now regained some sense of normalcy in her life and is focused solely on her education.“During the whole process, from when everything started my school average was below 50%, so i was only able to qualify to sit four subject. Either way i am very happy to have the opportunity,” stated

With hopes of becoming a nurse one day, the fifth form students tries to stay upbeat each day and avoids negative company. As for her status, she and her family have decided to keep it private by not letting her community nor school know. “If anyone finds out, i would feel so horrible because i know they are going to scorn me. Right now everyone treats me with love and respect and i want to keep it that way.”

“Growing up she wasn’t there for me, she was always going out with different men, this must have been why my grandmother took me in.”

“It was so hard on me, my grandmother had cancer and refused to do surgery, so things gradually got worse until she passed. The next month, my mother was becoming real sick and losing a lot of weight.”

Above it All,  highlights youth who have found a way to persevere despite experiencing extenuating circumstances.

For questions or comments email: yl.jamaica@gmail.com

Look out for Mishca’s story in next week’s Youthlink

“She didn’t like me and she made me know it. Something as simple as a hug, she would push me away. I was so angry at her, because i wanted us to a regular mother-daughter relationship, but it was clear this was never going to happen”